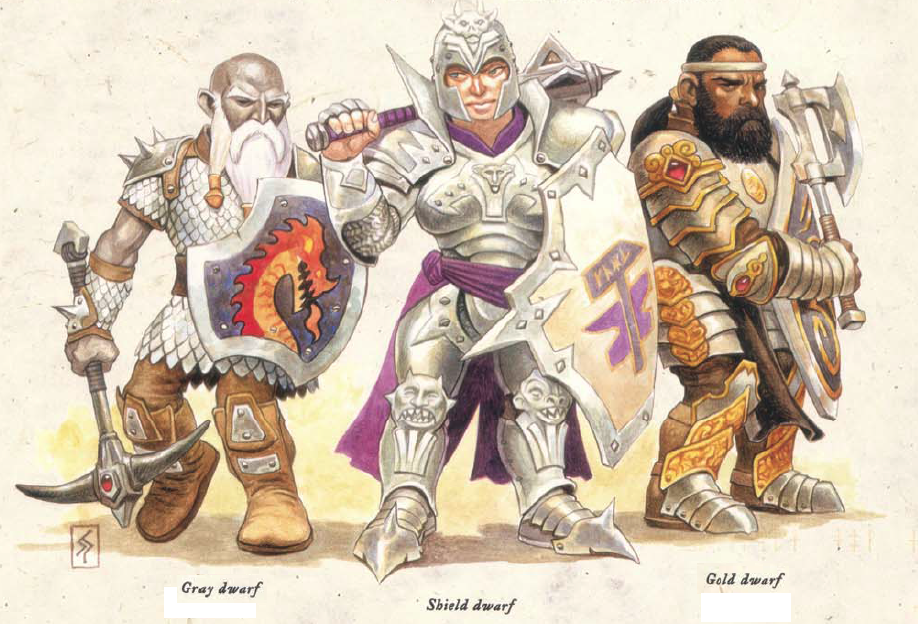 The glory of the ancient dwarven kingdoms such as Bhaerynden, Shanatar and Delzoun lies far in the past, yet these stout champions remain vigilant against the myriad foes arrayed against them. The Stout Folk pride themselves in the achievements of their people. Claiming that they stepped fully formed from the heart of the world, dwarves have much in common with the stone and steel they respect. Dwarves are doughty, toughened by countless wars. Though many of their strongholds lay in ruin, the dwarves bravely hold what remains theirs, while looking to reclaim their past empires.

Dwarves are stubborn and cynical, but also brave and tenacious. Besieged on all sides by ancient enemies, dwarves remain true to the traditions and values of their heritage. Dwarves are naturally dour and suspicious. Slow to trust, they keep those outside their tight family groups at hammer-length, suspecting the worst in everyone they meet until they can believe without a shred of doubt in another’s honest and good intentions.

Dwarves hold betrayals in their memories and swear solemn vows to avenge themselves for what might have been just a minor slight. Dwarves despise goblins and orcs above all other races and wipe them out wherever they find them. To dwarves, these creatures are an infestation, and it’s their duty to purge the world of them lest they gather in numbers and overrun their fortified cities. Such creatures aren’t the only ones to gain the dwarves’ enmity, and the dwarves hunt drow, grimlocks, and other Underdark races with relish.

Although the dwarves were originally one people, strife, internecine conflict, and endless wars with orcs and goblinoids sundered the race, scattering it throughout Faerûn. With each grudging defeat, the dwarves drifted farther from their roots until their natural adaptation to new environments left a physical mark upon their bodies. Of the various clans and tribes, most dwarves fall into one of two groups: gold dwarves and shield dwarves. Their evil dark cousins, the duergar, dwell in the Underdark and have little contact with the surface races.

One way or another, almost all dwarves have roots that go back to the first great dwarven kingdom of Bhaerynden, founded in the South. Not long after the first cities were built, many dwarves left (who would eventually become the shield dwarves and duergar) and founded the realm of Shanatar. Those that stayed became the gold dwarves, and after the fall of Bhaerynden settled the Great Rift created by Bhaerynden’s collapse.

Religion and Alignment
Dwarves most commonly worship members of the Dwarven Pantheon. The god Moradin is seen as the creator of the dwarves, and following that god most dwarves are lawful good in alignment. The duergar are an exception to this rule, their dark history making them usually lawful evil.

Aging
Dwarves mature at the same rate as humans, but they’re considered young until the age of 50. Dwarves are considered middle aged at 125, old around 190, and venerable at 250. The average life span of a dwarf is 350 years, though they can live to up to 450.