A gold dwarven male of 52 years with mocha skin and chocolate eyes, of average height at 4’1" and of a normal stocky dwarven build. His hair and beard is best described as “salt and pepper” for the dark colour flecked with white. Usually seen carrying a giant mallet, a wok as a shield, and a spoon. Has pots and pans covering his body serving as, surprisingly to those who see it, quite effective armor.

The gold dwarf Zerok Ironfist hails from the Great Rift, ancestral home of his people. Born in 1437 DR, the young Zerok knew the area as East Rift growing up, as at that time half the rift had opened up into an even deeper chasm known as the Underchasm. Zerok grew up in the great city of Eartheart, the religious centre of the gold dwarven lands, as well as the political capital since the former capital of Underhome was lost during the events of the Spellplague.

In the centre of Eartheart lies the massive complex of buildings known as the Temple of the Mordinsamman, the name for the dwarven deities. Like all young gold dwarves of the Rift, Zerok was taken to the Temples and asked which god he most connected with. However, the young dwarf, already prodigious in the kitchen, was interested in none of them – he instead claimed a deep connection to the god Host. While a rare choice, his calling was respected by the gold dwarves, and thus Zerok set out on a path to become a True Chef – a cleric of Host.

In 1486 DR the ancient primordial Grumbar was persuaded by various Chosen of the gods to fill in the Underchasm with earth once more, returning the East Rift to the Great Rift it once was and largely ending the drow threat from the Underdark. In celebration, the dwarves planned to have a mighty feast the likes of which had never been seen – and the greatest chefs of the South were to compete for the honor of serving. Zerok, at the age of only 45, was the youngest chef selected. As the pride of the Rift, he was to face off against the two clerics of Host he considered his greatest rivals – the wood elf Hestian Blumenvar of Amtar Forest and the strongheart halfling of Delzimmer, Olive Jaim.

The three chefs went head-to-head in an cooking competition in the tradition of Host. Although the crowd, mostly gold dwarves, was entirely behind Zerok, in the end it was the wood elf Hestian Blumenvar that won the day with his superior cooking. While the city celebrated, Zerok descended into depression. That night he was visited by a vision of Host, who told him what he needed to do to in penitence for his failure – travel over four thousand miles to the northwest of Faerûn, find the famed Orc Chef of the Silver Marches, and serve under him as Sous Chef.

Thus it was that Zerok set off on his long pilgrimage to the North, a journey that would take him almost a year. Once there he travelled to Mithral Hall, a great citadel of the shield dwarves that was just recovering from a conflict with neighbouring orcs – orcs Zerok knew harboured the Orc Chef. In the early months of 1487 DR Zerok finally entered the orc enclave in the Spine of the World and met with the Orc Chef, an orc of the Many-Arrows clan. The orc was silent, but understood Zerok’s passion, and allowed him to serve as Sous Chef.

Zerok served under the nameless Orc Chef for 2 full years, toiling away in the orc citadel of Dark Arrow Keep. In early 1489 DR however, on a routine ingredient gathering mission, the orcs of the gathering party were slain by shield dwarven barbarians, and the Orc Chef disappeared. Zerok felt the hand of Host in this event, and realised that his time serving the Orc Chef was done – it was time to make his own way in the world once more. Thus he set off for the city of Neverwinter, where he knew there to be a Temple to Host where he could become reacquainted with civilized cooking.

Some months later, Zerok by chance ran into Crag Gravelpit, a shield dwarf he met in Mithral Hall, in Neverwinter’s Driftwood Tavern. The dwarf had been discussing a job offered by another shield dwarf, Gundren Rockseeker, escorting a wagon of supplies to the town of Phandalin at the base of the Sword Mountains. Intrigued by what new ingredients he might find in the region, and having heard of a famous soup cooked by the Chef of Phandalin’s Stonehill Inn, Zerok decided to also act as a wagon guard and travel to Phandalin.

Since arriving in Phandalin, Zerok has gained a reputation for being the most sensible and approachable of his travelling companions. He carries himself with an air of refinement, and has a taste for etiquette that many townsfolk find charming. While he is still associated with companions many consider strange, the people of Phandalin on the whole find themselves quite glad to have Zerok there. Not only has the gold dwarf been instrumental in ridding the town of the local gang, he has cleared monsters from the area, and is generally thought to keep some of his more extreme and violent companions in line. During the Greengrass festival Zerok cooked for the people of Phandalin in a cooking contest against the Chef of the Stonehill Inn, Trilena Stonehill, and though he lost the people of Phandalin love him for not only his great skill but his enthusiasm for cooking for them. 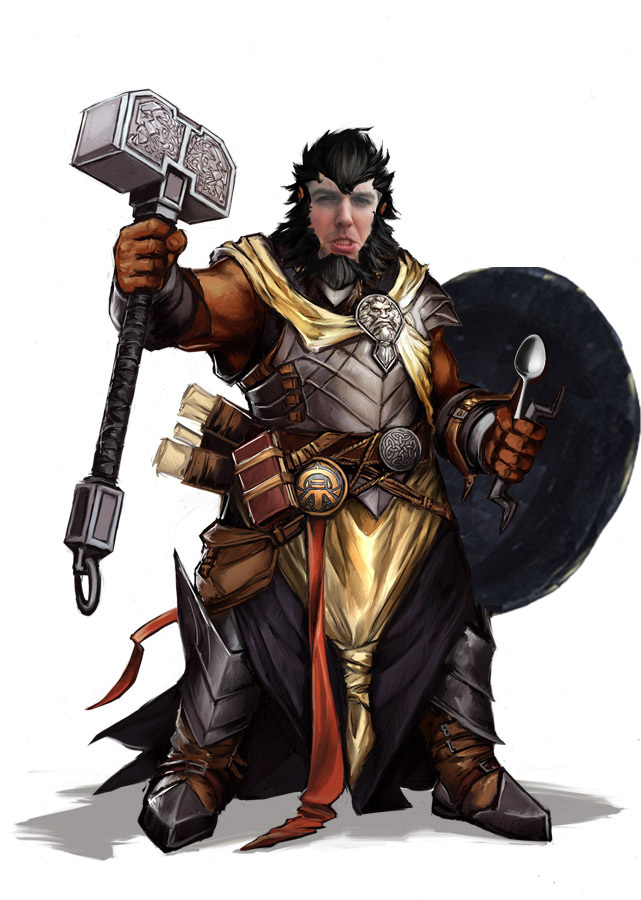