This half-elf of 22 years, descended from a moon elf and a human, is perhaps best characterized by the inconsistency of his appearance. He is a master of illusion and deception, and appears as a different man to different people.

The half-elf who calls himself Lucky Charmer grew up in the slums of Athkatla, the mega-city capital of Amn, along with his childhood friends and fellow half-elves Princess Fluffypants and Talis, as well as the tiefling Baraxis. The half-elf and the younger tiefling were oft competing for the affection of the beautiful but rather empty-headed Talis, a rivalry that continued well into adulthood.

Athkatla was a hard place to grow up in, and Lucky turned to the life of a rogue at a young age. Over time he and a handful of nine others (including three goblins) formed a group of highwaymen and thieves that took care to take only from those who didn’t need it, and would often give to the poor and starving – although they also took on many jobs simply to satiate their sense of adventure. As did all thieves in Amn (as well as in many other places throughout the Sword Coast) Lucky’s group paid on a percentage of their takings to a contact of the Shadow Thieves, the most powerful thieves guild in Faerûn – as nothing in Athkatla could occur without their say-so, such was their power.

In 1485 DR, at the age of 18, Lucky and his band of comrades decided to raid a grain caravan travelling north, hoping to distribute the “loot” to the starving of Amn. However, during the raid they discovered that the grain was merely being used to hide shipments of hidden drugs, jewels, and many other valuables including a few particularly well-bred poodles. Lucky immediately recognized their mistake – this was a caravan under the protection of the Shadow Thieves. The three goblins of their band panicked, and one of them managed to knock over and smash a lantern, igniting a fire that almost instantly leapt to rage over half the caravan. The grains all began to burst ferociously, creating puffed rice, corn, and wheat – a discovery which had the small gang looking on in amazement as they desperately tried to put out the fire. The group then and there decided on their gang’s new name – the Cereal Killers (a close second to the Cereal Firestarters). The goblins would become known as Snap, Crackle, and Pop for the sounds that went off.

Although the fire was eventually quenched, most of the contents of the caravan had been destroyed. Knowing that the Shadow Thieves would eventually figure out who had raided their caravan, the newly dubbed Cereal Killers sold what was left of the loot, gave away the remaining grain, and split the city as soon as they could, going their separate ways – at least for the time being. Over a meal of toasted grain (which they had discovered was quite to their taste), they agreed to stay in contact while trying to stay as far away from Athkatla and the Shadow Thieves as possible.

Thus Lucky left that city to begin his adventures, first deciding to pursue a life as a pirate travelling the Sea of Swords. During those heady times he tracked another love-interest to an island run by monkeys and pirate ghosts, and even crashed a wedding using rootbeer. However, eventually he decided to return to the mainland. Not long afterwards, Lucky heard rumours that his childhood friend Talis had been kidnapped by dragon cultists, who he later discovered were members of the Cult of the Dragon. His desire for Talis reignited, the half-elf relentlessly pursued rumours of the Cult throughout the Sword Coast. His investigations led him to the town of Greenest, which came under attack by the Cult within days of his arrival there.

Lucky had also sent word to Athkatla where he knew his old friends Princess Fluffypants and Baraxis still resided, informing the half-elf and tiefling that they too should travel to Greenest so that together they could find Talis. Lucky was the first to arrive in the small town, and was present when a blue dragon arrived and began to destroy buildings with its lightning breath as cultists poured in and looted the town of its wealth. Unfortunately, Baraxis arrived after the assault had begun, and became embroiled in a bold attempt to try and get some civilians to safety. The first time Lucky had seen the tiefling in years was looking at his dead body, brought in by a motley crew of companions Baraxis had met on the road.

Undeterred, Lucky’s determination to find Talis was stronger than ever. He became involved in an investigation into the actions of the Cult of the Dragon, mainly in an attempt to find his kidnapped love – as he believed eventually he would come across a cultist who knew of her. Teaming up with Baraxis’s companions Bob, Groβ, and Getafix, as well as his childhood friend Princess Fluffypants and a newcomer in Glinda Battlefate, Lucky became a central figure in the early organization against the Cult. His involvement eventually paid off, when he and his companions captured the Wearer of Purple Frulam Mondath in Baldur’s Gate. She revealed that Talis had not in fact been kidnapped at all – but was a respected cultist of some influence known as “Talis the White”. Though Lucky was not saddened by this development, he nevertheless decided to pursue his goal, and rescue Talis from her enthralment to the Cult.

Around this time Lucky discovered that he shared some interests with the Harpers, as represented by Leosin Erlanthar a half-elf who he and Getafix had rescued from the Cult near Greenest that had been investigating the Cult. Lucky subsequently joined their organization during his time in Baldur’s Gate, and has slowly built up his contacts with the secretive group ever since. He has also not forgotten the Cereal Killers, and has since periodically been in contact with them – notably instructing them all to gather in Greenest, and bolstering their numbers slowly (such as with the ex-cultist Hamez and the ogre Lothka, or “Frankenberry”).

On his journey north investigating the Cult, Lucky also forged a lasting bond with the rock gnome Jamna Gleamsilver, finding that he shared much in common with her – though she definitely had a ruthless streak. When he and his companions finally caught up with the Cult at Carnath Roadhouse and recaptured the loot they had stolen from Greenest, Lucky entrusted Jamna to get it back to its rightful owners due to the bond they shared.

Eventually Lucky would be reunited with Talis, quite by chance, in a small hunting lodge miles out of the way from anywhere. She was happy to see him, but it soon became clear that she was a card-carrying member of the Cult, and had not been kidnapped at all. After Lucky had left Athkatla, she had fallen in with an Amnian lord who had showered her with gifts and talked to her of the grandness of dragons. Although she did not fall for his charms, Talis became fascinated with the idea of dragons as superior beings – a belief that was slowly reinforced by “bad experiences” she had with humans, that she did not speak further of. This came to a head when the lord was killed by the white dragon Glazhael while trying to impress her, and the dragon spared her life. She went on to forge a bond with the dragon – a bond which Lucky was unable to convince her to walk away from.

Talis nevertheless left Lucky with some hope that they could one day be together, though she remained committed to draconic rule over what she called the “lesser races”. Ambitious and wishing to see herself rise through the ranks of the Cult of the Dragon and to see her rivals fall (most especially Rezmir the Black and Varram the White, Talis asked Lucky to aid her in this. Disheartened as he was that he could not convince her to leave with him, Lucky accepted her help in bringing down Rezmir, whom he and his companions had pursued all the way from Greenest. However, that task also brought Lucky’s companions to slay her white dragon companion Glazhael – something Lucky is not sure she will forgive him for.

When Lucky and his comrades returned to Waterdeep on the giant-possessed Skyreach Castle, having just slain a Cult wyrmspeaker as well as the Red Wizard exile Rath Modar, he unexpectedly found himself one of the figureheads for the conflict against the Cult of the Dragon – something he is not entirely comfortable with, even if the figurehead does happen to be one of his aliases, Mr Smith. Lucky remains acutely aware that the Shadow Thieves have not forgotten the “Poodle Incident” back in Athkatla – and fame would not help him escape their gaze.

Upon his return, Leosin Erlanthar would reveal that his ally Jamna Gleamsilver had actually been a member of the ruthless and secretive organization known as the Zhentarim – and she had never returned the loot stolen from Greenest. Later, the dwarf wyrmspeaker Varram the White revealed that In fact Jamna had instead travelled north towards Neverwinter, acting on a Zhentarim lead on the location of himself and the White Dragon Mask. Jamna managed to steal the mask, but upon attempting to meet with her contact, she found the contact to not be a Zhentarim at all – but instead none other than Kupshia, the bodyguard of Talis, whom Lucky had briefly met earlier. Kupshia had a four-armed troll rip one of the gnome’s arms off, and then ordered her death – though the gnome escaped.

Lucky was eventually reunited with Jamna back in Waterdeep, and the two healed the rift between them by forming an alliance of mutual benefit by getting the Zhentarim involved in the Council of Waterdeep. At that Council, it was revealed that Talis had used Varram’s fall to become the new White Wyrmspeaker – and was subsequently even further from Lucky’s grasp. The rogue nevertheless would not give up on her.

The Shadow Thieves however, had not forgotten him. A hired assassin named Gaston Allaevan informed Lucky that the shadowy guild would lift the bounty on his head, should he assassinate the Marshall of the Flaming Fist, Ulder Ravengard – who they claimed had a corrupt relationship with the major thieves’ organization in Baldur’s Gate, the Guild. Gaston informed him the Shadow Thieves were looking to expand their influence there, and the Guild and Ulder Ravengard stood in their way. However, Lucky refused, and Gaston regretfully informed him that soon there would no doubt be a new bounty on his head – one approximating fifty thousand gold pieces, if Gaston’s employer had not exaggerated. The rogue and the assassin parted amicably after a few drinks, though the two suspected their next meeting might not be as cordial.

Since then, Lucky has been even more careful to keep his appearance disguised when out in public. He trusts few, and even his companions do not know if Lucky is his true name or not – although he did reveal the truth of the matter to the sagely brass dragon Ileuthra as a demonstration of trust at the Council of Wyrms. Lucky’s quest to save Talis goes on, though the half-elf remains ever aware that both the Shadow Thieves and the Cult of the Dragon would dearly like to see him dead. 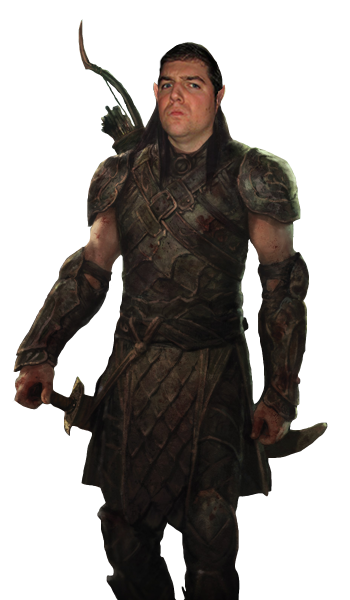