This sun elf is quite tall at 6’1", has silver eyes, gold-tinged skin and long copper hair. He is well into his third century, and is considered by elves to be middle aged. The unique glass staff he carries makes him instantly recognizable.

The sun elven wizard Himophelia, or simply “Himo”, has spent most of his life at the great University of Neverwinter, studying the mysteries of the arcane intensely. Born in 1219 DR, he has relatively ignored the goings on off the world outside the university in favour of his studies. He obtained a PhD from the University for studies in the field of pyromancy, a field in which he quickly became considered the most knowledgeable and respected academic. He ignored the call of the Elven Retreat in 1344 DR that saw many of his sun elven brethren leave Faerûn for Evermeet, so involved was he with his research.

However, in 1385 DR, the course of Himophelia’s life changed drastically. Soon after he reached the age of 166, when he was considered to be in his prime, everything Himo knew was thrown into disarray when Mystra, the goddess of magic, was murdered by the god Cyric. Although Himo had lived through the death of Mystra’s previous incarnation, Mystra had managed to foresee that event and had installed safeties that would protect the Weave of Magic, namely transferring her essence to the goddess’s subsequent incarnation. This time however, no such contingency for the Weave was in place, and the Weave was wrought and torn in the events known as the Spellplague. Like many other wizards, Himo’s mind was severely affected by these events, rendering him insane for quite some time.

Himo’s expansive knowledge of magic and lore was lost due to the backlash of Mystra’s death, and he never quite recovered. Even as the Wailing Years of the Spellplague receded, Himo’s knowledge did not return. However, his fervour and excitement for academic study had not left him. When the University reopened in 1403, he returned to his research, despite the misgivings of a few of his peers – though none dared truly challenge him due to his excellent reputation. As a result, Himo’s subsequent forays into academia were misled and fraught with error – eventually leading to his total discreditment and barring from the University of Neverwinter.

Over the following years Himo’s abilities of intelligent judgment slowly returned to him, though he remained a changed elf. He found himself easily distracted and entranced by the world around him, and often found himself investigating rocks or grass with great enthusiasm. He did not consider this a negative, as all things were of research interest to a true academic – and in truth his life inside the University’s walls had limited his experience of such things somewhat.

The “resurrection” of the goddess Mystra in 1485 DR and the complete restoration of the Weave of Magic assisted Himo’s recovery, and by 1489 DR Himophelia considered his ability to make rational judgments about academic matters to be sound. However, Himo was still totally discredited and barred from return to the University of Neverwinter. He realized to get the University’s attention he needed to discover something big, uncover something that the academia of the University would not be able to. Thus he decided to leave Neverwinter for a life of adventure.

He began to frequent the crawling halls of adventurers throughout the city, and it was on one fateful night such as this that he found himself at the Driftwood Tavern, overhearing a conversation between a couple of dwarves about “something big”, some kind of discovery one of the dwarves had made. Himo introduced himself to the dwarf, Gundren Rockseeker, who subsequently hired him as a guard for a wagon-load of supplies headed to the town of Phandalin.

Since arriving in Phandalin, Himo has been something of a curiosity to the townfolk. He has been seen inspecting stones on the ground, or simply lying down in the middle of the road and staring at the sky, or using his mage hand spell to get the local innkeeper’s attention. The townsfolk certainly think him strange, yet they are no doubt glad he does not seem as openly violent as a couple of his companions. In truth, though many of the people of Phandalin have no clue what goes on in the sun elf’s mind, they are glad to have him around – he has played a crucial role in ridding the town of bandits and slaying monsters harassing the area.

After interacting with a statue of Mystra inside the ruined Cragmaw Castle, Himo’s sanity has returned to him at an increasingly rapid rate, and he has found himself able to make rational decisions more easily than in the past. 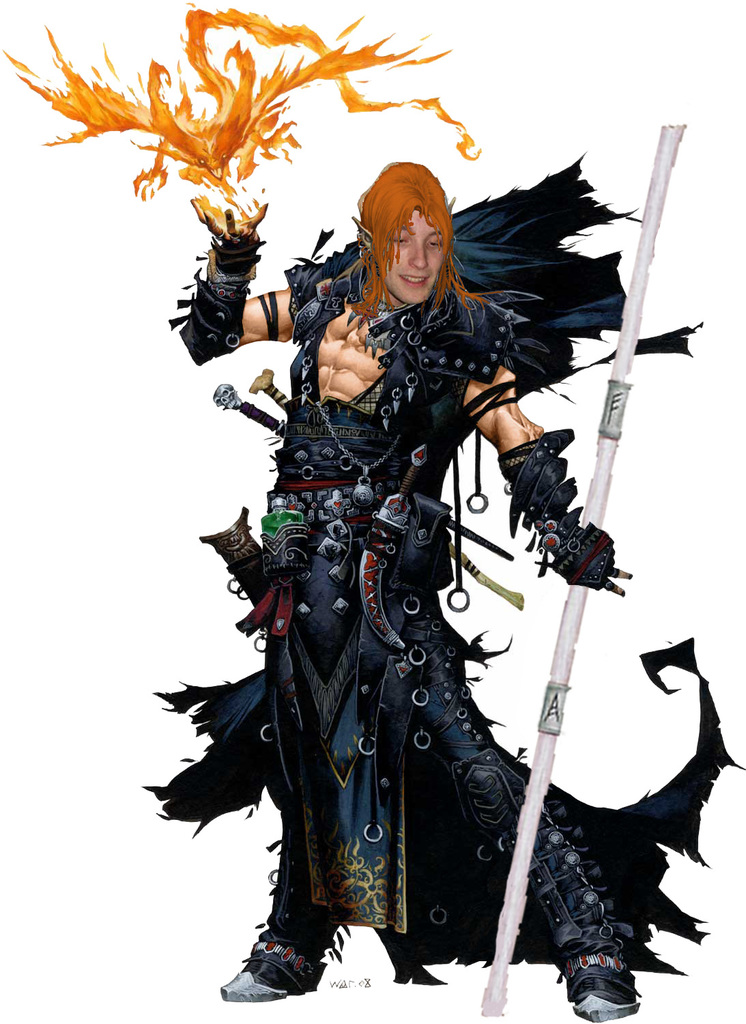