This charismatic half-elf of 22 years carries herself as befits an entertainer of some fame. She wears an icy blue cloak and is often seen with an instrument in her hands.

The half-elf girl that would later take on the name “Princess Fluffypants” grew up in the slums of Athkatla, the capital of Amn, along with her childhood friends and fellow half-elves Lucky and Talis, as well as the tiefling Baraxis. She developed the wish to become an entertainer at a young age, and began performing as soon as she could. By the age of sixteen, she had already become quite famed in her home city – but the young girl felt a strong desire to take her entertaining prowess to another level.

An intelligent girl and an avid reader of historical works, she became fascinated with the strange and mystical creatures of the deep wilds known as the fey, and eventually she decided to try and seek out and meet such a creature. During a particularly cold Midwinter while out on such an expedition, she sat down to play herself and the companions she was travelling with a tune on her flute. Her melody was so beautiful that it drew the attention of a satyr named Dion, a raucous fey who became entranced by her music. The satyr stayed with the group, insisting on listening to the girl’s music as often as possible – often while getting himself and the others intoxicated and indulging in fine foods he would seemingly produce from nowhere.

When Dion offered her a chance to play her music for his master, an Archfey – the most powerful of the fey – in the strange and mysterious land of the Feywild, her curiosity got the better of her. The satyr led the young girl through a rift between the worlds, and guided her into an amazing and foreign land of everlasting twilight and twinkling lights hanging over a cold and frosty landscape. The satyr guided her through the strange land to a castle made of the purest ice, carved at seemingly impossible angles. There the girl was introduced to a being of cold, blue-tinged skin, looking somewhat like an elf, wearing gilded robes of white and blue. He glowed with power and charisma, and he smiled as the girl approached, and introduced himself as Rellevar Danuvien – the Archfey known as the Frost Sprite King.

Rellevar and the girl talked of much, over what may have only been a short time, or a lifetime – she could never be sure, so strange did the passage of time feel in this place. They talked of music and joy, and the Archfey took great pleasure in the girl’s musical talents. In return, the Archfey showed her incredible feats he could perform with his mastery of fey magic – such as crafting music out of the wind, and transforming parts of his castle around him into different shapes at will. The girl was awed, and expressed a wish to possess such power – a power not only over the ability to create music, but to see and alter the very fabric of existence. Rellevar smiled enigmatically, and said that he could grant such a thing. However, such a gift would not come for free. He would grant the girl the ability to access that power, through him – but only if the two formed a pact that one day he would ask for a favour in return – and she would grant him it without question. The girl agreed. To mark the agreement, she gave over her name to the Archfey, which he would hold to mark her as his until such time as the pact was fulfilled. Her name thus disappeared out of the minds of herself and all who knew her.

Rellevar and the girl spent much more time together in his strange, cold dominion. He himself did not entirely lack warmth, but how his mind worked was entirely foreign to her, and she longed for other contact. Her new powers not yet fully controlled, Rellevar was reluctant to let her return to the mortal world, and so he instead took her with him to a meeting of powerful fey that had been set up by Queen Tiandra, the leader of the Summer Court, one of the most powerful and influential Archfey of all. However, there the girl grew bored as the fey went off to talk of their inscrutable dealings, and she found her mind wandering. During such a time, she found an incredibly beautiful flute that had been left behind by one of the Archfey, Hyrsam, the Prince of Satyrs. On a whim, the girl decided that she would steal the flute for herself, and so hid it away in her cloak.

Upon their return to Rellevar’s dominion, the Frost Sprite King discovered this. He seemed intrigued rather than angry, talking of the influence of fate on such events rather than of stealing as a sin. However, he indicated that Hyrsam would soon discover the truth, and come looking for her and the flute. Because of this, the girls training in how to control her new power would have to come to an end, and she would return to the mortal world to discover the rest on her own – until such time would come that Rellevar would ask for his favour. Upon returning to the mortal world, the girl soon found that she needed a new name in order to get along, and she took the moniker “Princess Fluffypants” as her stage name. With her new warlock powers supplementing her performing abilities, her renown as an entertainer became far more widespread than ever before.

Six years later, “Princess Fluffypants” got word from her childhood friend Lucky that their friend Talis had been kidnapped by the Cult of the Dragon. Fearing for her friend, and eager to put her powers to good use, the warlock headed north out of Amn to the town of Greenest, where Lucky had followed rumours of the Cult’s activity. Since then, as she searches for her friend, the entertainer has become embroiled in the battle against the dragon cultists, even finding herself a figurehead of the conflict. Her fame has increased enormously, not only as an entertainer due to a couple of spectacular performances in Elturel, Baldur’s Gate, and Waterdeep – but also as one of the Heroes of Skyreach – so named for her and her companions’ famous defeat of ranking cultists aboard the giant-possessed Skyreach Castle. She has found many admirers, the most forthcoming of whom is a Harper she and her allies rescued in Carlon Amoffel – a man who seems to have become relatively obsessed with her.

Whilst pursuing one of the Cult’s wyrmspeakers named Rezmir, Fluffypants was drawn into a magical portal leading her back into the Feywild. There she once again met with Rellevar, for the first time in over six years. The Archfey had decided it was time for “Fluffypants” to make good on her end of the pact. The Archfey dined with her in his incredible ice palace before making his request – that she bring him five dragon hearts – one of each of the five chromatic dragon bloodlines. His intentions were unclear, and this time he swiftly returned her to the Material Plane with little in the way of discussion. Since then the entertainer has continued her quest with her companions, keeping in mind this task. Thus far she has gained the white dragon heart of Glazhael and the blue dragon heart of Roraurim, whom she dealt the killing blow to personally.

She returned from her short jaunt to the Feywild to discover that Lucky had met with Talis while she was gone, and had discovered that she had become a true believer of the Cult of the Dragon. Fearing that her friend could be forever lost, Princess Fluffypants nevertheless decided to continue to hope that Talis could one day be rescued from her false beliefs in draconic superiority. Thus she continues her battle against the Cult, all the while keeping in mind her search for more dragon hearts.

Some time later, Hyrsam, the archfey Prince of Satyrs, finally caught up to her in the Misty Forest while she and her companions were pursuing a green dragon. The Archfey did not seem entirely angry about the stealing of his flute, which he revealed to have hidden magical qualities – but rather was impressed by the audacity of her actions. It became apparent that those loyal to him had been watching her progress for some time, and that he was fully aware of the extent of her pact with Rellevar. Hyrsam revealed what he claimed to be the reasons behind Rellevar’s use of her – that he, and other members of the Fey Court of Stars, including Queen Tiandra herself, were planning to use the dragon hearts to re-instigate the Dracorage Mythal, sending dragonkind into periodic rages once more. However, it would not only be chromatic dragons – but metallics as well. For she was not the only pawn in the game of the Archfey – but four others as well had been sent out in the mortal world to gain things to complete the ritual. One of them had been sent after metallic dragon hearts.

The warlock was not entirely sure what to do with this information, though Hyrsam was eager to share his opinion – that the recreation of such ancient magic to control things was an abomination against the innate freedom of all things, including dragons. He indicated that she could put a stop to this – that he could give her a fake heart to disrupt the ritual, that would be undetected by Rellevar and his allies. She was still unsure, but the Prince of Satyrs did not seem to be in a hurry. He indicated that he would back her against Rellevar if things went sour, as a powerful archfey himself, and that he could ensure her powers would not go diluted. If she agreed to help, Hyrsam would even unlock the power of her flute – a magical artifact crafted by him long ago. With that, he departed, teaching the entertainer a tune through which he could be contacted.

Her quest to rescue Talis from the grip of the Cult of the Dragon goes on, and all the while the intrigues of the Archfey go on in the background. Princess Fluffypants is aware that she has become quite central in their plots, and her decision who to side with could have enormous impact for the future of dragonkind, and indeed the whole of Faerûn. 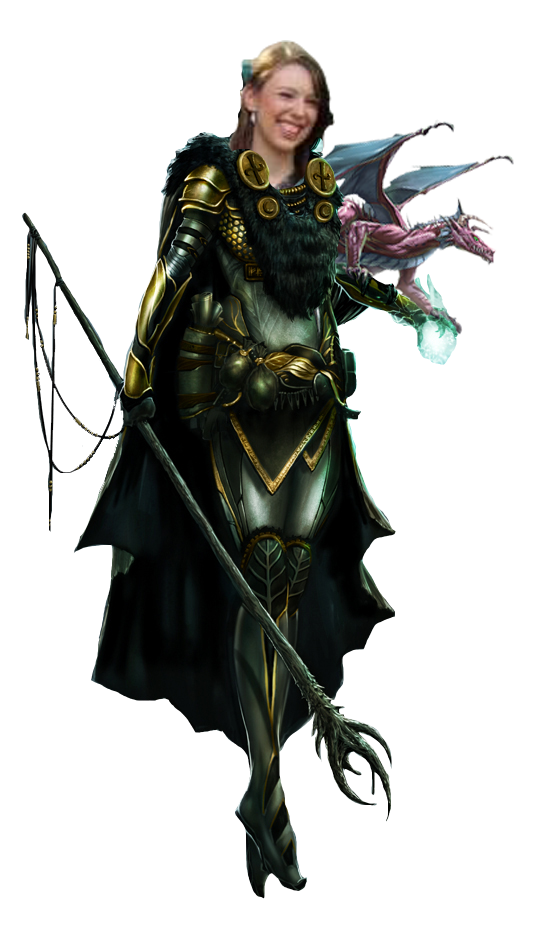