Halfling rogue with a talent for trouble

A lightfoot halfling of unspecific gender and 23 years, unusually tall for a hin at 3’3", and lightly built. Light coloured eyes and pale skin typical of lightfoots of the North, with dark and unruly hair. Typically seen carrying a rapier and a shortbow, while wearing studded leather. The halfling is considered to be intersex, and most often identifies as a female.

A wandering adventurer who grew up in Neverwinter with no fixed home to speak of, Dugan “Dug” Seaskipper became acquainted with the hardships of life from a very young age. As a child, her parents would travel from city to city, never staying in one place for very long. Dug knew her mother and father stole from others and had even killed, as they reluctantly taught her the ways of a thief and how to defend herself. She never had time to find out the truth behind her parents’ actions, as when Dug was seven they were killed in a fire that burnt down the house where they were staying in the city of Neverwinter. Dug fled the scene, to return later and find the charred remains of her parents and her older brother disappeared.

In the years that followed Dug drifted from foster-home to foster-home, often spending a great deal of time in between getting by in the streets of Neverwinter. Feeling that her thieving skills were the only real connection she had left with her parents, and despite overwhelming feelings of conflict within her, she began a life of stealing and cheating to get by. It was a hard life, but it taught her many things – including how to be persuasive and how to get what she wanted.

Dug became able to support herself from a relatively young age, and gave up the foster homes for a life of her own. She would roam the streets of Neverwinter, waiting to see what fancied her roaming whims. Every now and again however, her thoughts would lead back to the fire that claimed her parents. Rumours had it that bandits were responsible for the fire, and that inspired an unrelenting hatred of all people who would do such evil. She couldn’t help but wonder as well – what had happened to her brother… and did he have any hand in the fire? Dug always kept her ears to the ground in the hope of discovering the truth of what had happened.

By the age of 23, her search had still yielded nothing, and Dug began to tire of Neverwinter. In the spring of 1489 DR, Dugan found herself bored and looking for action in Neverwinter’s Driftwood Tavern. As luck would have it, she overheard a conversation between three dwarves about “something big” that had been discovered in the Sword Mountains, with a sun elf listening in as well. One of the dwarves even spoke of bandits that had been hassling the people in the town of Phandalin.

Realising her chance to get out of Neverwinter, experience some real adventure, and maybe even take out some deep-seeded anger on some bandit thugs, Dug offered herself up as a wagon guard for the shield dwarf Gundren Rockseeker, who needed supplies taken to the town of Phandalin before setting off into the mountains. Over a few ales she was introduced to the other two dwarves, Crag Gravelpit and Zerok Ironfist, as well as the sun elf Himophelia who offered his services as well. The next day, she set off for the town of Phandalin.

Since arriving in Phandalin Dug was gained something of a mixed reputation. Those who meet her often find her incredibly charming and a pleasure to be around initially, though they soon discover that she is prone to act on whatever whim crosses her mind. Subsequently the halfling has gained a reputation for being quite a dangerous person. She publicly scalped four members of the Redbrand gang in the street in front of the townsfolk, though she gained some respect for telling them all to turn away first. Many are unsure what to make of the halfling, who at one time stepped in to protect Qelline Alderleaf young son Carp from one of her violent dwarven friends, and another time backslapped him in the street. She has also been spotted suspiciously lurking around the back of prominent buildings, eliciting more gossip from the townsfolk. One thing is clear to the people of Phandalin either way – Dug is not someone to be on the bad side of. In truth, most townsfolk are quite happy to have Dugan around – since her arrival she and her companions have cleared the town of a prominent gang and slain many monsters threatening the area. 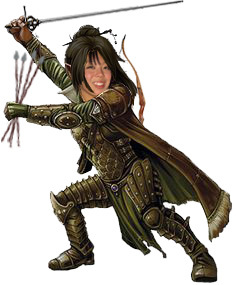