This dwarf of 29 years is tall for a shield dwarf at 4’6", and of standard stocky dwarven build weighing in at 163 pounds. He has brown eyes, and a light brown beard and hair. Usually seen wearing heavy armour and carrying a large maul made from stone, the pole of which is covered in vertebrae, with the entire weapon being coated in metal.

This shield dwarf of Mithral Hall was raised a stonemason, but his life was forever changed when he was called up to be a member of the militia against increasing drow raids on dwarven settlements. That conflict escalated into the War of Everlasting Darkness, and Crag was soon promoted to a lieutenant in the militia and given a commanding role.

During the Battle for Mithral Hall during the war, Crag experienced his first kill. It was against a drow that was fleeing from the battle – Crag ran up behind him, and with his immense, ogre-like strength punched through the drow’s back and ripped out his vertebral column. Using his skill as a stonemason, Crag honoured the kill by inserting a stone rod down the centre of the vertebrae and coated the whole structure in metal, embedding a stone maul-head on the top of a rod, making the weapon for which Crag would become well-known.

Crag retired from the militia after the Battle of Jolhad’s Hold – the final battle for Mithral Hall that forced the drow back from the citadel and secured the shield dwarven holdings in the area. Crag emerged a different dwarf after that battle, with many who knew him saying that he saw things there that made him look at life differently. One of the most obvious differences was the changes he made to his famous maul – he fixed a dwarven skull onto the end of it, encasing it in stone. Whatever had happened, a year after the war ended Crag left Mithral Hall behind, ostensibly to begin a new life of adventure.

By the spring of 1489 DR that search for adventure had brought Crag to Neverwinter, where he fortuitously met up with Gundren Rockseeker – a dwarf miner who had had a critical role in the Battle for Jolhad’s Hold, triggering the explosion that caved in the cavern and stopped the drow advance. Over a couple of ales in the Driftwood Tavern, Crag agreed to act as a guard for a wagon load of Gundren’s supplies that the dwarf needed taken to the town of Phandalin, while the dwarf whispered excitedly of “something big” that he had discovered in the Sword Mountains.

Since arriving in Phandalin, Crag has developed a reputation for being a bit unhinged. The townsfolk of Phandalin make sure to avoid him in the street, many of whom witnessed him shitting into the skull of a Redbrand he had just slain. His interactions with the townfolk have gained him a reputation for being aggressive and blood-thirsty, and possibly being mentally impaired. Nevertheless he and his band of companions have also gained a reputation for getting dirty work done quickly, and many townsfolk are glad to have Crag on hand for ridding the area of monsters and other evils.

He was known for his small dwarven war-dog Barry, who constantly accompanied him until he was incinerated by a fireball inside Wave Echo Cave. Barry’s death sparked a great rage inside Crag, who tried to take on a flameskull and four zombies by himself, a decision that would lead to his death. However, he was quickly brought back from death by his comrades using a scroll of revivify. He still mourns the loss of Barry, and carries the dog’s ashes with him. 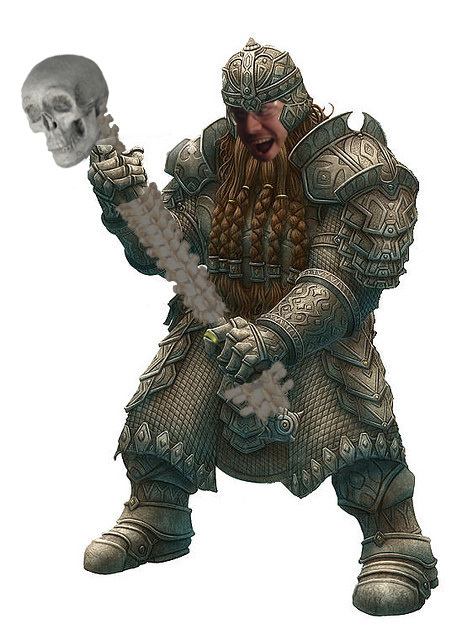